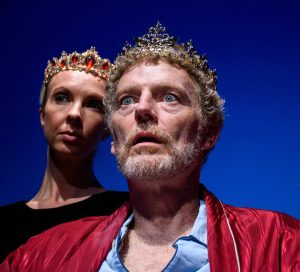 If the death of one man is a tragedy and a million a statistic, where does Everyman‘s death fall?  So asks Ionesco as his infinitely mutable Bérenger rages against mortality in “Exit the King,” just opened at City Garage.  This was one of the plays that introduced me to small theatre,  that distinct art form with which I’ve had an on-again, off-again relationship ever since.   I didn’t know what to make of Ionesco when I first encountered him.  It was late 1993 and the Independent Theatre Company (ITC)  had staged “Exit” at their tiny House of Candles Theatre on Stanton Street in the lower East Side of New York City.    I had heard of the absurdists,  knew they were “important,” and that this play along with “Rhinoceros” were considered essential by those who knew about such things.     I don’t remember anything specific about the production apart from walking out with more questions than answers and yet willing to try the playwright again.

Chief Garagistes Frédérique Michel and Charles Duncombe have crafted their own translaptation  of the now well-known story – a petulant, arrogant, self-absorbed bigamist struldbrugg of a King Bérenger the First (Troy Dunn) is fading after four hundred years and doesn’t want to go, gently or otherwise, into that good night.   He pouts, sulks, screams, and tantrums  through the five stages of grief as his two wives and small retinue, emblems of his body and the body politic, try to ease what’s left of his mind.  Only the second wife, the keening Queen Marie (Lindsay Plake) shares his belief in the unfairness and tragedy of it all.   The rest try to prepare him for the inevitable, each according to his or her means.

Michel preserves the one act structure and plays up the comedic elements for most of it while not overplaying the house style.  Other than the Doctor’s (Anthony Sannazzaro) Pythonesque silly walk, the movement work is kept in check in favor of  the  text.  There is not much extraneous business and Duncombe’s set supports the action unobtrusively.  (The Actors Gang staged “Exit” 20 years ago, turning a tragicomic romp into a two act slog.  That, my second encounter  with the work, did not survive the merciful intermission.)   We begin to suspect that the King really isn’t and that we’re seeing the end of Everyman Bérenger, majestic in mind only, with other characters representing parts of his failing kingdom-cum-body.   The Doctor and Guard  (David E. Frank) quietly back off the stage leaving him defenseless. Much put-upon Maid Juliette (Kat Johnston in a fine, understated turn) leaves and the myriad autonomous functions of the body, life, and living leave with her.

To the question is this a one character or a six character play, the answer of course, is two.  It’s a bit of a setup but the comedy is a sweet headfake to the denouement between Bérenger and his first wife, the imperious, practical, and sensible Queen Marguerite.  The final scene between the resonant Dunn and cool, elegant, swan-necked Natasha St. Clair Johnson is the slow, terrifying, inevitable waltz that’s on all of our dance cards.  When that end comes, we know, life goes on without us.  Johnson has been appearing frequently in recent productions but is exceptionally well-matched to this role and this moment, the only truly regal presence.    The stage, unencumbered by videos or effects,  smoothly darkens as he ascends his throne for the last time with a single spot closing over his alternately tortured, frightened, desperate, pleading face.   This is the way the world ends, not with a bang but a whimper.  It is one of those theatrical moments that can leave audiences holding their collective breath before a well-deserved exhale and wild applause.  Or it could have had it not been for the goober taking cellphone photos at intervals throughout the evening doing so at this juncture.  The flash came on in the dying light and to top it off, he began clapping before the fadeout to which the production had been building for the preceding 99 minutes.

Despite Bérenger’s resemblance to 45 (or vice-versa), “Exit” is not the overt political call-to-arms that is “Rhinoceros”  and certainly not the out-and-out political comedy that is “La Leçon/The Lesson” which Liz Pocock knocked into orbit in 2004 at the company’s old Promenade location.  Even if it were that call, the world is voting the other way these days and by and large, the world doesn’t go to see plays.   “Exit”‘s scope is smaller in respects, grander in others but this strong production is certainly worth a visit to Bergamot Station between now and 14 July.

And here’s King Louis the First with Steely Queen Keely with their take on the final curtain.