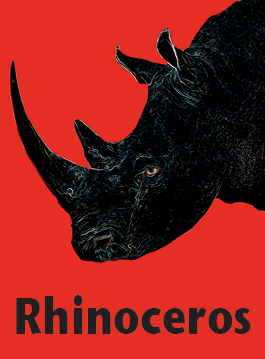 The November 8th tragedy and the ascendance of the mephistocracy guaranteed the revival of Ionesco’s ‘Rhinoceros.‘ The play’s well-known humanist and anti-fascist themes make it an obvious, almost reflexive choice, guaranteed to please progressive audiences but this simple explanation does not do justice to the crackling rendition recently opened on Pacific Resident Theatre’s main stage.

Director Guillermo Cienfuegos, a skilled cast, and a top-notch production team deftly imbue subtlety and nuance while staying faithful to a brash, repetitive, and yes, absurd text in Derek Prouse‘s translation. Weak-willed alcoholic everyman Berenger sees his provincial town replete with its well-dressed residents, charming bistros, and local businesses overrun step-by-step and inch-by-inch by rhinos. His friends and neighbors are first alarmed, then intrigued, and ultimately co-opted. When the movement spreads worldwide he is left alone to declare his resistance in a final act of defiance.

Sweet coincidence had Ionesco releasing the play the same year that Rod Serling began ‘The Twilight Zone’ on American television. Berenger’s (Keith Stevenson) transformation from milquetoast to man begins with a thorough scolding and airing of his shortcomings from  putative friend Jean (Alex Fernandez who looks suspiciously like Cienfuegos). A stampeding animal, unseen but definitely heard, interrupts this cafe intervention and draws the notice of all including local costermongers, residents, a logician, and a busking mime. The slapstick first act concerns itself with disbelief and some humorous attempts at analysis. Academics are funny and mimes are annoying in any era and in any circumstance.

Ionesco’s purposefully repetitive and clichéd dialogue can tire even a focussed reader. Fortunately, the cast delivers the needed dimension and shade bringing the words to vigorous life. Characters speak to and not at one another, conversations ebb and flow while pulling the viewer purposefully to a destination. Not all productions of absurdist material can manage this. Themes of desire and transformation are on par with the conventionally political. The long play does take time to find its feet and explodes in a riveting second of three acts. Berenger goes to Jean’s apartment to make amends for their quarrel only to watch his friend mutate before his eyes. Fernande-fuegos towers over Stevenson physically and vocally, bringing palpable rage to several minutes of sustained, mesmerizing terror. Later, Dudard (Jeff Lorch), Berenger’s rival in love and for advancement stands tall on the sidelines rationalizing the rhino onslaught,  until Daisy (Carole Weyers) chooses against him. A simple slouch, a growl, and he too is off.

PRT’s mainstage is not large by any means and it would have been understandable had this been a minimalist, black-box affair, striking while the political iron was still hot. The company however committed to twelve performers, costumes (Christine Cover Ferro), lights (Justin Preston), full sets (David Maurer), and an  evocative soundscape (Christopher Mosciatello).   Several wildly clever stage transformations in the tight space rightly drew loud applause on opening night.

It would have been easy to map current faces onto Ionesco’s lecherous bosses, armchair socialists, deplorables, ladder climbers, and wonks. Cienfuegos wisely does not take the bait and manifest these to make any particular topical statement. It is also very easy to see the play as a blow for a pluralist, inclusive, and heterogeneous society against the reactionary. In actuality, the excellent but decidedly monochrome characters and cast are under concerted attack by dark, malevolent Asiatic and African forces. Nudge nudge, wink wink. Look back at the grisly campaign and grislier aftermath, a large segment of the US and the world views itself as stalwart Berenger refusing to capitulate to the invading other. There are many of them, they vote, and the division is not going away.  That this ‘Rhinoceros’ speaks across the spectrum including both extremes is its triumph.