From back in the day when cars had teeth: An assortment of dental excellence from El Segundo’s marvelous Automobile Driving Museum.  It looks like a showcase of lovingly restored and superbly maintained American cars and it is all that.  And the side of fries?  Machines are meant to be used and on Sundays, they take a rotating subset onto the roads and let the public ride along.

I went in not knowing that the museum was actually closed for a private party but no one said anything and I browsed the collection at leisure.  When I go back – and I will – I look forward to opening doors, sitting in the seats, and enjoying the insides of these artefacts of a bygone era.  That’s also allowed and encouraged.

See more about the ADM through the two videos following the gallery. 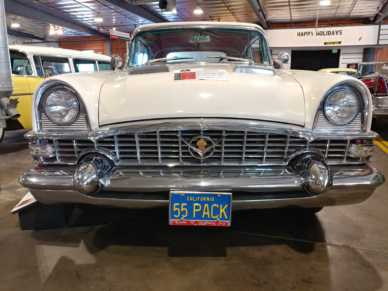 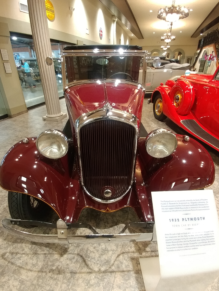 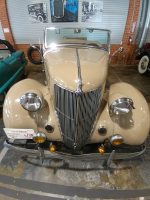 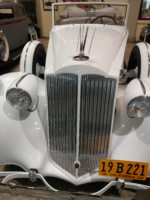 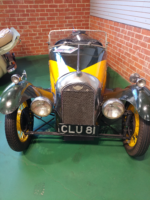 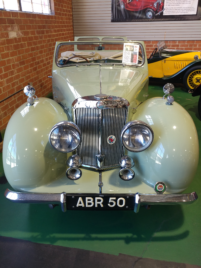 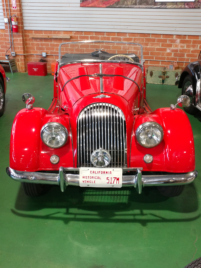 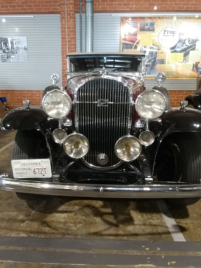 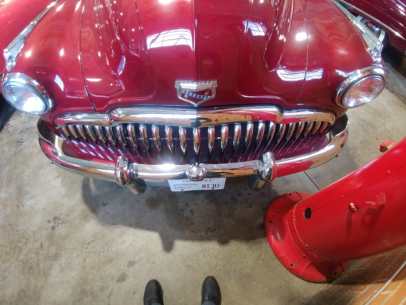 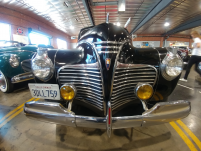 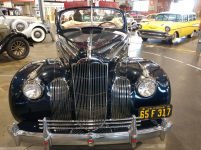 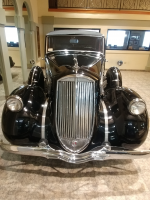 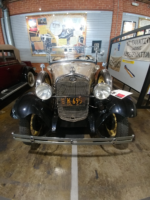 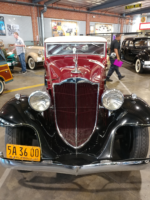 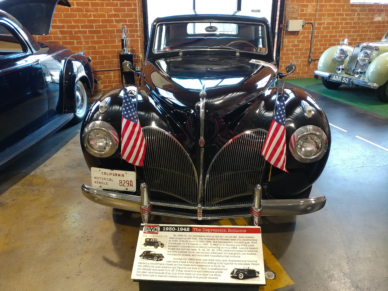 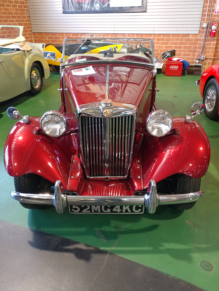 Not all collaborations are created equal. Some time ago, the jewel-box art museum in El Segundo teamed with the Getty and noted graffiti artists to compare and contrast ostensibly street art with medieval illuminated manuscripts. ‘Scratch’ was an audacious reach across centuries, comprehensive in its choices, and convincing thanks to its subtle yet driving focus on context.

‘Studio,’ ESMoA’s just-opened collaboration with LACMA suffers greatly in comparison. It’s a retrospective of the late Norbert Tadeusz (1940-2011) with twenty-seven paintings from moderate to large adorning the walls and leaving a lot of whitespace for all that. There’s nothing particularly wrong with the art but nothing especially right about it, either.  All fall short of the promised monumental scale. Tadeusz seemed to like bold colors, moderate perspective, gymnastics, and cats. The works on offer are all about his studio, hence the title. A couple almost pull you in. Almost.

The website says he was important(tm) and that he studied and associated with other important(tm) people. It might even be true but the evidence and context woven so well together in ‘Scratch’ is startlingly absent here. Captions are limited to a webpage per piece with a thumbnail, size and material data, and ‘Q&ART’ a question designed to solicit comments.  The viewer can see these on two iPads or on his or her smartphone at http://esmoa.org/gallery/studio/  Even a linked Wikipedia article on the artist is in German.  Asking audiences to engage with the art is fine but it doesn’t relieve the gallery of its obligations in the matter.

The catalog has an unconvincing introduction from LACMA’s unremarkable Michael Govan and mostly shows photographs of the artworks with a few other images and an interview with Tadeusz’s wife. Whitespace again rules the day. It’s as if ESMoA had to meet its opening date and did what it could with time and money available. The artist deserves better.

I am not a big fan of rap. When I see graffiti in my neighborhood, I wonder what’s coming down the pike. I’ve never seen anyone improved by a tattoo. But, there is no doubt that there are some major creative talents working in all of those forms and that their connection to traditional, accepted art is more than tenuous.

Graffiti and medieval manuscripts aren’t obvious partners but can go together like peanut butter and chocolate. Context, it seems, matters. LA’s Antics Performance Group continues to develop “Illuminated Manuscript” presented almost exactly a year ago at the Ford Amphitheatre. Amy “Catfox” Campion staged the Gilgamesh epic with an ensemble of fearless dancers to a pulsing score. Each scene is set to a video clip of a tagger doing his or her thing, illuminating the manuscript or stone tablet as the case may be. It was absorbing, thrilling, and falling short of epic by being just a little too short.

This year the Getty Research Institute and collector Ed Sweeney present SCRATCH a purely visual pairing along very similar lines at the El Segundo Museum of Art. Sweeney saw a connection, the Getty’s David Brafman agreed. ESMoA is art’s analog of a black box theater: A single long room with a vaulted ceiling, it’s success depends on the ambitions of the exhibits and here it succeeds in spades. The walls and floors are decorated by graffiti and tattoo artists from the greater Southern California area. It is an in-yer-face riot of color and literally larger-than-life representations. Some are by individuals, others by the artists working in groups. That, in itself, is surprising. We hear much of the individual, highly competitive world of graffiti. The artists acknowledge one another but to hear of them collaborating like this is like hearing of an anarchist collective. The creative choreography at work here must be an interesting story in and of itself. However it was done, it was done – much like Campion pulled together her Gilgamesh ensemble from several disciplines within the modern dance community.

The connection among the modern artists and the medieval manuscript is the Liber Amicorum or Book of Friends. We learn that it is customary for graffitists to contribute to one another’s sketchbooks as had been done in centuries past by artists of a different stripe. There are many sober display cases containing the Getty’s contribution of antiquaria, printed and scribed, for easy comparison. The older works are definitely of the subtle, understated type where the modern are emphatically not. Subject matter aside, there are some intriguing similarities in shading and the creation of depth in a two dimensional medium. The logistical problems would be many but a performance of Illuminated Manuscript would go well with this exhibit. Technology unobtrusively supports the art. There are iPads aplenty, photography without flash is allowed. The Getty has taken a lead in digitizing rare materials and one can easily flip through page after page of images of the priceless books in the cases. A large chunk of it is online and can be examined from home. Johann Michael Püchler’s Calendarium Perpetuum is an almost infinitely-recursive exploration of his world and time. What look like lines and hatches are actually words upon magnification. It’s also an engraving meaning he did this with a stylus and in mirror-image.

There are plenty of other good reasons to go see SCRATCH. The LA Times is an unqualified disaster when it comes to theater and classical music reporting but has not yet given up the ghost when it comes to art commentary. New addition Carolina Miranda provides some background in a blog post. One delightful bit of fallout from this melange is that it has nicely honked off a segment of the right wing.

El Segundo has quietly become a destination. Between the chemical industry on one side and aerospace on the other lie a growing collection of breweries, galleries, shops, restaurants, the Old Town Music Hall, and a clean, well-lit 99-cent store.

The Making of video: No sound – Wish I’d stopped by the museum as this was happening… At Clutter Park in El Segundo. North field construction at LAX pushes many operations to the south field.  Airbus A380 takes off from runway 25L, most often used for landings.

Many thanks to Captain Vector for the spotter pointer.

The small and very active community of aircraft photographers and videographers is putting up some superb material on the usual outlets. Close to home, many shoot from El Segundo’s Clutter Park where they can get nice views of LAX’s south runway operations although with some interference from low buildings.

Then, there is Youtube’s SpeedbirdHD. He says little about himself other than that he is an aviation enthusiast in Los Angeles. There must be more to it than that. He has unique access to LAX operations, almost assuredly through a job on the premises. His videos of the heavy metal flying in and out are in a league of their own. Speedbird and his HD camera get tarmac footage of regional jets, superjumbos, and even the occasional miltary lifter from every runway. His edits usually include relevant air-traffic control conversations in the background. Top class stuff.

Here’s his channel. His 2012 highlight reel is a good place to start.

Instrumentation makers Bruel and Kjaer are working with many airports to measure and display sound levels in the neighborhoods they adjoin.   B&K’s Webtrak tool for LAX is available at http://ems02.bksv.com/webtrak/lax4

See flights coming in and out of the greater Los Angeles area in real time.  See sound levels in Playa del Rey, Hawthorne, El Segundo, and Inglewood.  There’s also a replay feature.  Use Historical Mode to pick a day and time and see what happened; speed it up if you like.  If you’d like to complain about a particular flight, select the icon of the suspected flight, get its number, and click a link to file a report.

The Beach Cities are usually  quiet despite LAX but there are many nights where the engine roar is powerful despite  distance and intervening structures.  So, what can cause this?  Thermal inversion layers in the atmosphere are known to refract sound waves due to the index of refraction difference at the boundary.   Acoustical engineer  Mike O’Connor offers a nice summary of the physics, analogous to optical refraction, at http://www.mocpa.com/inversion.html

He concludes
“It is not only noise from vehicular traffic on distant segments of roadways that is boosted in strength by temperature inversions. Emissions from distant trains and commercial aircraft (during takeoffs) are also amplified. The reader who has never before taken note of this phenomenon might now try to see if it’s ‘real’. Just listen to the background noises from distant trains, distant aircraft (just during takeoff runs) and vehicles on distant roadway segments, preferably after dark or shortly before or after dawn, and note the atmospheric conditions. Disregard windy conditions, but take note of the loudness of such noises under all other atmospheric conditions. It should become apparent that the noise levels from distant sources are clearly higher on some days than on others, even though the observations were made at approximately the same time each day. With some effort it should also be apparent that the calm and clear conditions that are said here to give rise to temperature inversions are in effect when the distant sources seem loudest.”

Henry Robinson offers a more detailed treatment at http://www.lochlyn.org/atmophys/sound/sound.pdf with an interesting observation about amphitheatre design.

“On a day when convection near the ground causes the temperature to decrease rapidly with height, sound heard on the ground from a departing aircraft will be muffled because the sound rays, and energy, will be forcing the sound upward. Indeed, balloonists often can hear conversations of people on the ground but be unable to make themselves heard by the same people on the ground. The Greeks constructed their theaters, as in Figure 3, so everyone could see, but, in doing so, they also used the natural curvature of sound to enable everyone to hear as well in afternoon plays.

Takeoff during well mixed conditions is relatively quiet at the ground but takeoff through an inversion concentrates the sound under the aircraft.  Observe sound abatement procedures while taking off in an inversion situation.”

So, is that the mechanism at work on noisy Redondo Beach nights?  This is  worth some observation and checking against weather data.