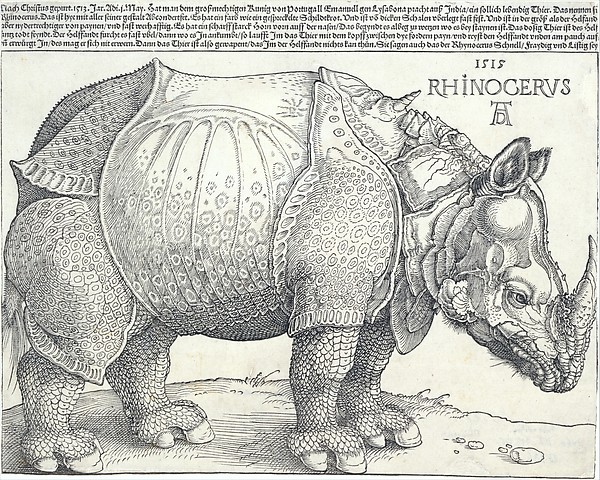 The Rhinoceros by Albrecht Dürer

Congratulations and Big Ups to the City of Hamburg.  Ten years after groundbreaking, the striking Elbphilharmonie opens for concerts in a hall designed by Yasuhisa Toyota and appropriate fanfare. Robert Burns Woodward (1917-1979) is as well known to chemists as his namesakes are to poets and journalists. His contributions to the synthesis of organic compounds cannot be overstated and a staggering number of now-famous professors passed through his labs at Harvard.

Chemistry was and is a huge field but the part that most people see is beakers, retorts, and churning solutions cooking up complex molecules. This is where Woodward became a legend at an early age. His unshared 1965 Nobel Prize was for “for his outstanding achievements in the art of organic synthesis” and not for any specific synthetic accomplishment. Interestingly, he felt that he deserved a share of the 1973 Nobel to Fischer and Wilkinson and would certainly have shared in the 1981 prize to Fukui and Hoffman, had he lived long enough.

My education was in physical chemistry, far removed from organic synthesis. I scarcely recall seeing any of the faculty members from that area when I was in graduate school – the field is that fragmented. Unlike many others of my stripe, I enjoyed my undergraduate organic chemistry classes although I struggled in them. Legions of students have been told that the subject is to be endured, not enjoyed, and requires only memorization. This is utter claptrap. If taught well, and Berkeley did (at least back then), it is like learning a language; alphabet to words to grammar, sentences, literature, and interpretation. Those with an artistic bent also find a lot of fun in the complex three-dimensional structures that are represented out of necessity in two-dimensional drawings. You can’t speak this or any other language by memorizing a dictionary. Organic’s problem is that the material has to be presented and assimilated in such a short time.

Woodward’s generation of chemists didn’t have the modern arsenal of apparatus to determine the composition and structure of what they had made. In fact, they helped develop – or at least drive the need to develop – x-ray crystallography, magnetic resonance, optical and mass spectroscopy, and a variety of other methods closer to physics and physical chemistry. Deduction and inference played a starring role. E.J. Corey, only a few years younger than Woodward, later developed retrosynthetic analysis into a fine art leading to his own unshared Nobel in 1990. Corey looks at complex molecules as assemblies of successively smaller molecular fragments. Some of these might exist as stable compounds, others as hypothetical fragments that could be prepared with the right hooks for further use. Any molecule may be disconnected in several ways and the chemist has to use physical laws, experience, and intuition to decide which approach makes the most sense. Repeat recursively and it is usually possible to get to a relatively simple path from a desired product to commonly available starting materials – a common examination question and a standard tool in the modern chemist’s repertoire.

Some thirty two years after my undergraduate degree, I find myself using the retrosynthetic approach far from its original use. I try to look at problems as a nested collection of subproblems, going down the tree until they become relatively tractable. At the end of this, I have a plan that has traded off time, cost, and risk ending up with a list of materials, procedures, checks and crosschecks, time and personnel estimates, and a good idea of which step or steps pace the effort. In engineering, these map to schedules, risk analyses, bills of materials, assembly, test, and reporting plans, quality control, critical path analyses, and cost although in no particular order. People who do this are called System Engineers in my industry and many companies have claimed to have invented the concept.

Looking backward is how organic chemistry students are encouraged to approach problems if they want to succeed in their courses. The temptation is of course to apply it everywhere and that’s not quite so appropriate. It works if there’s a clear idea of what needs to be done. What sets Woodward, Corey, and their equivalents in other fields is knowing what to go after and what to set aside. That can be done many ways but it helps to be brilliant. If the computers can be taught to do that as they have been taught to do systematic decomposition, it’s over for us. A second temptation is to over-romanticize. These accomplishments in synthesis are usually the result of large research groups implementing a plan and doing the long, often tedious bench work which, when complete, is associated with the group leader’s name. This is where chemistry and high-energy physics intersect. This method of chemical training is imperfect and is periodically questioned when things go horribly wrong at the human level. The scientific and artistic merits of the work have to be assessed in that light.

There are not many films or recordings of Woodward and his equally legendary multi-hour lectures. He transcended his field and his institution, given leeway to do what he liked how he liked it. Dylan Stiles has unearthed a gem from the Harvard archives – a rare departmental seminar from 1972 where Woodward presents the 15-year collaborative effort between his group and Albert Eschenmoser’s lab resulting in the total synthesis of the large, unwieldy, and beautiful Vitamin B12. The introduction by Prof. David Dolphin is itself thirty minutes long with insights into the departmental culture of that time. The main event is a brutally clear and patrician exposition while the speaker chainsmokes in-between sips of his daiquiri. The grainy black-and-white visuals are charming but somewhat hard to read. Nathan Werner’s slides from a 2010 seminar are a very useful supplement.