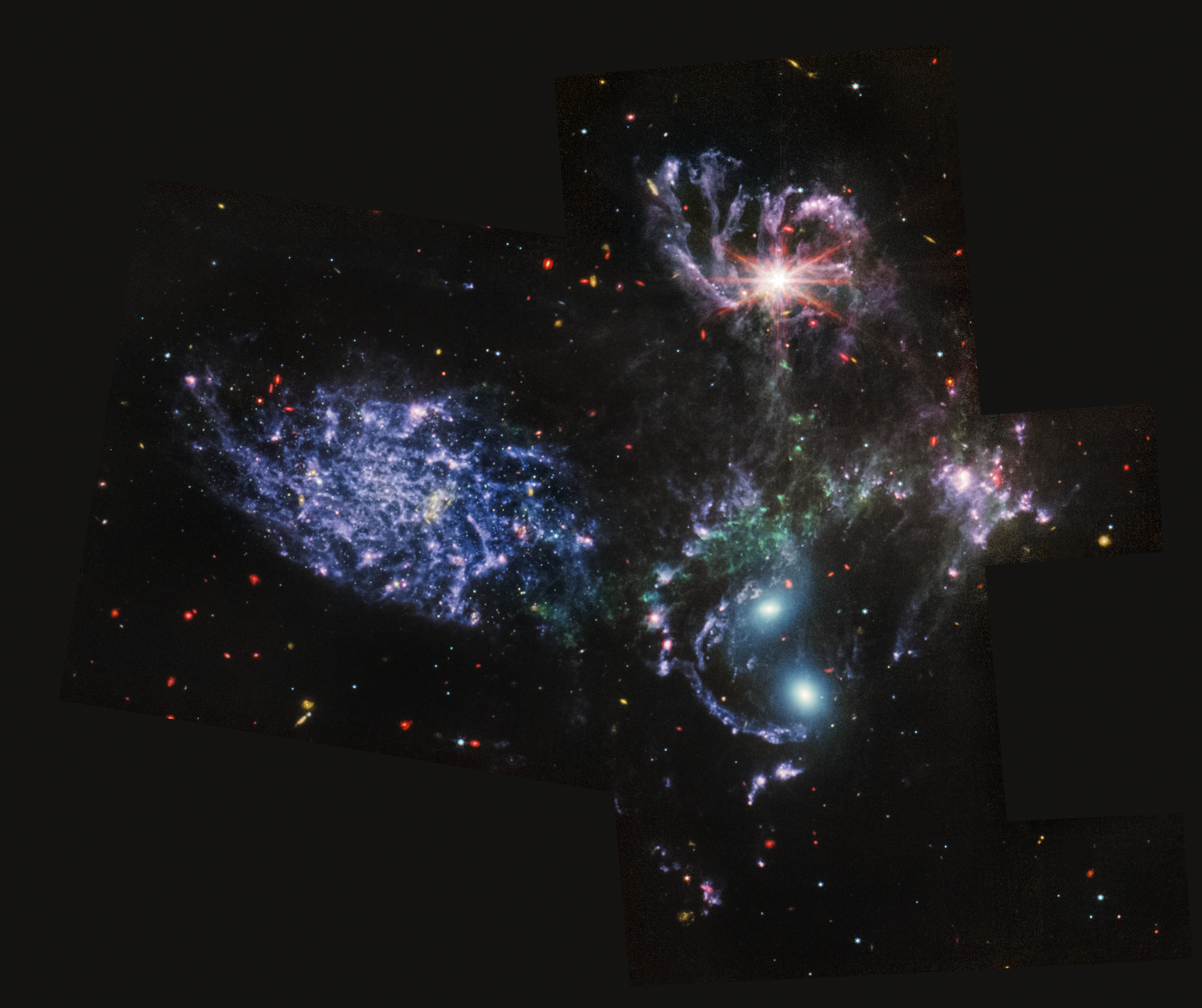 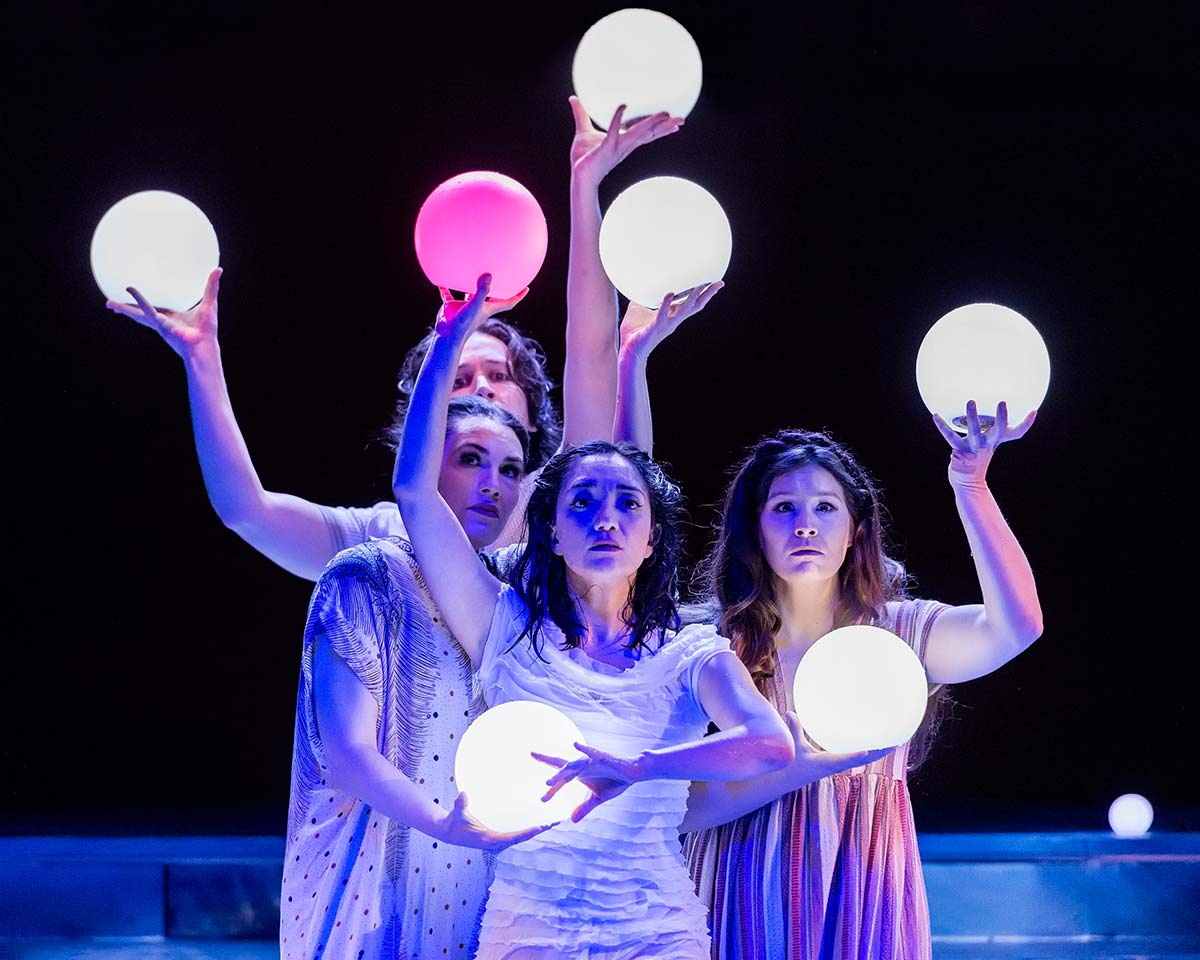 ANW’s tribute to myth, art, and engineering is both visually dazzling and a chutzponic choice for this temporary breather from the pandemic.  Water is everywhere – onstage and on the audience – as a gifted cast seamlessly weaves eight stories  and a coda from Ovid  to impressive stagecraft.  The play is sufficiently well-known that there’s no point in recapping the fables-for-grownups  by Mary Zimmerman,  a brand unto herself.   Locally, Stephen Legawiec’s long-departed and much lamented Ziggurat Theatre Ensemble did exceptional service to myth.  The Sacred Fools and Coeurage also deliver technical miracles on a budget.  Zimmerman ups the ante requiring an onstage pool central to her theme.  ANW has built the resources over the years to afford the rights, the engineering, and the resident ensemble to pull it all off.  The costs must be astronomical especially for a barely four week run, an oddly appropriate leap-of-faith in art over economics. 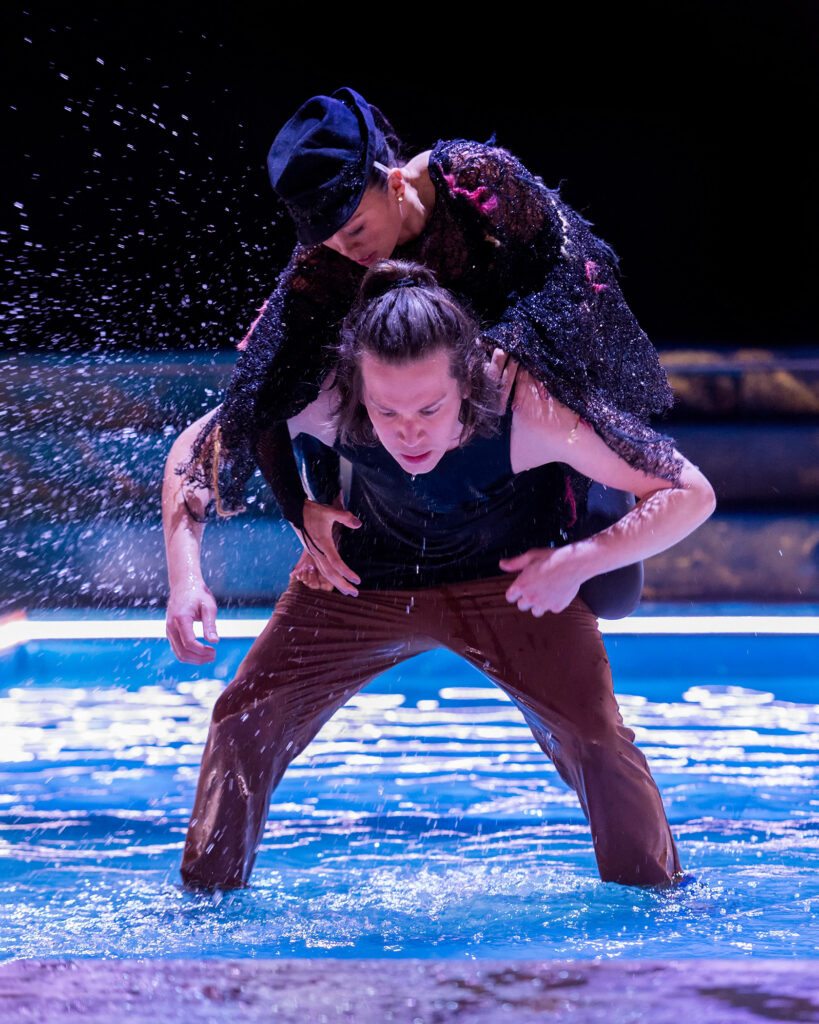 On top of the usual artistic concerns and choices, director Julia Rodriguez-Elliott has to see to the safety of her performers who are feet, knees, and backs in the water as much as they are out of it.  This is no mean feat given costumes (Garry Lennon), props (Shen Heckel),  walking continuously on a wet stage, and a disease spread by droplets.   The company has hewn to its resident artist model (six of the nine performers) although it seems to have gone away from its roots in repertory.  It is interesting to note the changing of the guard having followed the company closely in the 90s to mid 2000s and sporadically thereafter.  Geoff Elliott remains a constant of the motion with Rafael Goldstein and Erika Soto now regular members along with unfamiliar faces with extensive company and classical credits.  That Shakesperean training pays off handsomely with uniformly rich, resonant, and nuanced voices inhabiting instead of reciting the text.  It’s a heady mix of comedy, drama, pathos, and bathos.  Trisha Miller is excellent as Alcyone,  Sydney A. Mason as a nasty Aphrodite, and DeJuan Christopher as Ceyx.  Elliott is all the fathers; Pythonesque as Helios negotiating with Phaeton (Kasey Mahaffy) as well as  Midas and Cinyras navigating daughter problems.  The physical demands are great as the cast have to carry one another in and out of the water throughout the piece where one slip could end many careers.  The level of trust engendered by long and close collaboration must be off the charts and hard to conceive with a team assembled for one production.

But, oh, that engineering – Francois-Pierre Couture (design), Ken Booth (lighting), and Robert Oriol (sound) – deserves a loud, two-syllable, “Damn!”  Even if we take the pool  for granted, electricity, water, and people don’t mix.  This constrains the high powered lights to surround the stage and there again from safe a distance – yet nothing essential is in shadow.   Glowing orbs are undoubtedly enabled by LEDs.  Their collective play off the water and onto the walls are a splendid touch – carrying the audience along waves of action floating on Oriol’s effective yet unobtrusive soundscape.  And we should not take any of this for granted.  Going from page to stage is a tough artistic job but no easier than taking a technical concept through design, build, test, and delivery.  ANW’s timelapse shows the large uncredited crew that made it happen and glimpses the kind of backstage preparation area accessible to very few of the city’s theatremakers.  Yes, there are a couple of songs but … what are you going to do?  Barring extension, only five performances remain so act accordingly.

Note bene: While there are no bad seats at ANW, the raised stage does obscure the water’s surface from the front rows.  There is a benefit (and certainly no harm) in going to the middle or even the back of the house.  Those up front will get splashed.

Proof of vaccination/booster required, Masks must be worn inside the theatre 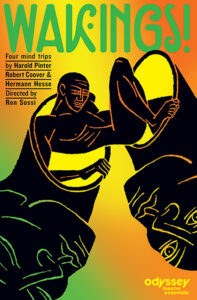 In ‘Rip Awake,’ Darrell Larson who excelled in pre-COVID Strindberg lets it fly as Rip Van Winkle left to figure out what and who is left of his former world.  Robert Coover, the only non-Nobelist on the bill, has written a nice although a touch too long fourth-wall breaking rant where Van Winkle limns the difficult mechanics of his awakening to soft bones, spiral toenails, and frayed mind.  It’s a meaty monologue for the ‘actor of a certain age’ and Larson rages and brawls about the stage with mountain-goat confidence.

Pinter the writer had long become Pinter, dissertation fodder by the time he wrote ‘A Kind of Alaska’ in 1982.    Deborah (Diana Cignoni), now 45, awakes after succumbing to sleeping sickness at age 16 with her devoted doctor (Ron Bottitta) and long-suffering sister (Kristina Ladegaard) attending.    Deborah is nostalgic, uncertain, and kind of a … jerk towards the few she has left and there is a small twist in why these two people still hang about her.    There is some good writing in her coming to and coming to grips with her situation but the mixing of German, Nordic, and British accents dislocates the situation.   For all the acclaim, Pinter is narrowly focussed on specific castes of British jackholes (that American audiences find endlessly fascinating) and efforts to apply him outside that milieu can run into trouble.

The bookends are less effective.  ‘Victoria Station’ another 1982 Pinter effort has taxi dispatcher Bottitta trying in vain to get driver C.J. O’Toole to pick up a fare.  The driver has, to be charitable, checked out, cruising around long gone London landmarks infatuated with a possibly dead passenger.    These Pinters are lesser-known for a reason, the malevolent craftsman behind ‘The Caretaker,’  ‘No Man’s Land,’ and ‘Betrayal’ is barely visible with scarcely a memorable line in the pair.  O’Toole returns in a non-speaking solo in the closer as Siddhartha rambling wild like Rip at first, later finding a secret of time and his enlightenment in a river.  Castmates narrate earnestly from the novel to a clichéd music track.

Yet it is still worth a look.  Self-admittedly a scratching of the surface, Sossi paradoxically succeeds even when the playlets individually stumble.   Models of consciousness aside, there is a strong resonance to a world full of bottled rage peeking out from years of isolation, relearning how to act among others, and looking for some meaning in it all.  The dispatcher’s bosses don’t care that he’s alone, overworked, and can’t get through to a disaffected employee – there’s profit to be had.  Self-centered Deborah alternately denies her condition and snarks at her long-suffering caregivers.  Rip is out for revenge against those, real or perceived, responsible for his prolonged slumber.  He turns wild and this being America, turns gun against dog and daughter imagining them to be others all the while.   The woman to my left just had to consult her phone well into the fourth act.  We live this insanity each and every day with no end in sight and even worse on the horizon.  Against all that, the Hesse is an earnest attempt at hope and release.   Whether it succeeds or not is up to each viewer.

There are doubtless easier ways to rebuild audience after a plague.  Many Manchin Democrats argue that this is the time for trivial comedy by the usual suspects.  Audiences should consider rewarding The Odyssey for going against that grain and taking this calculated risk.

Enjoy Alasdair Beckett–King of England and Eleanor Morton of Scotland (which may be the same . Or not. They all look alike to me.)  Prepare to watch just one more and then one more and … 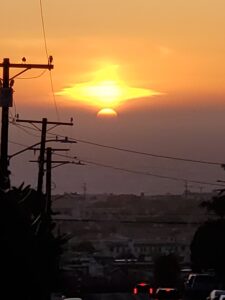 We will all go together when we go. All suffused with an incandescent glow. — Tom Lehrer

I’m quite impressed by the leadership shown by the Executive Branch to the reprehensible situation in Ukraine.  Regrettably when dealing with psychopaths, sanctions and embargoes only go so far.  Without fusion in the sun, we wouldn’t live.  But, fusion on earth seems inevitable now.  We won’t live through that, either.

So, let us enjoy sunsets while we can.  Even the ones that look like mushroom clouds.

We can but hope that history repeats itself north and east of Rome.  🇺🇦

Rams vs. Bengals, they say.  Whoda thunk it?