“What’s it about?”
“It’s about to make me very rich”
— attr. Tom Stoppard to a friend’s question about ‘Rosencrantz and Guildenstern are Dead’ 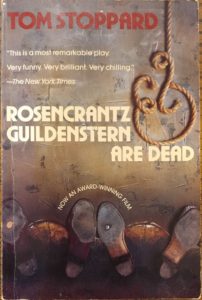 Mortality, predestination, and free-will are beloved literary fodder.  Tom Stoppard‘s ‘Rosencrantz and Guildenstern are Dead‘ has for some reason been held up for fifty years as an exemplar of how to bring all those themes to the stage and is a surefire draw at midsized theatres.   It is the kind of work that audiences seek when they want to be challenged and Stoppard accomplishes that in spades.  Clocking in at nearly three hours, he constantly tests their attention, patience, and good will.  One hopes that a live performance by a reputable, classically-trained ensemble can bring some structure and coherence to a dense, difficult, often self-indulgent script.  A Noise Within’s current staging stays true to the text but regrettably offers little beyond it.

R&G may have been a refreshing hipper, youthful, comedic antidote to Beckett in the mid-1960s but time has taken its toll.  The tale told by and through two idiots is frustratingly digressive and the once-fresh ploys and devices now commonplace.  The protagonists –  bewildered by probability, abused by nobility, and manipulated by artists – are irreversibly yoked to fate.   Fragments of the play-surrounding-the-play take place between lengthy philosophizing and repeated doses of forced humor containing mostly empty calories.

Stoppard perhaps intentionally left it all open to interpretation with all the smugness that only the modern artist can muster.  Director Geoff Elliott estimates he has read the play over thirty times, finding ever-deeper undercurrents of the human experience each time.  This is highly encouraging since there is ample room for directorial opinion.  Unfortunately, that license is lacking in this faithful and respectful production.   Rafael Goldstein’s contemplative Guildenstern fares far better than Kasey Mahaffey’s nitwit Rosencrantz.   What’s frustrating are the tantalizing glimpses of a through line, some sign of a trail through the dense overgrowth of insufferable look-at-me cleverness that infests so much of Stoppard.  This is solely thanks to Wesley Mann’s virtuoso turn as The Player, an apt name that has taken on different connotations in the intervening decades.   Mann imbues the pivotal role with subtle, growing menace masked by a thinning veneer of humor.   This hangdog Charon knows more and is capable of far more than he lets on  – he is Twain’s Mysterious Stranger, Bulgakov’s Mysterious Traveler, the link among the many worlds within the play and the world outside watching it.   Sadly, no sooner does momentum and interest build than the character goes off stage for a while, taking the energy with him.

The production is typically handsome in the ANW house style with stronger leads than the wan 2016 ‘Arcadia’ which, for all that, has aged somewhat better as a play.  The words are all there, the stage directions are followed, everyone yells, sulks, rails, and brawls with precision and Opening night was technically flawless.   Stoppard is about as far from an idiot as one can get but all this sound and fury may not, in fact, signify anything.